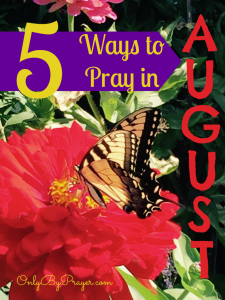 For many, the start of school heralds the end of summer, perhaps not on the calendar, but at home as parents, children, and teachers prepare themselves for the start of the school year. Hot weather still abounds, however, and state fairs are the activity of choice this month. As you enjoy the warm days of August, here’s a few ways to pray with Only By Prayer.

As you can imagine, this day was set up to honor and support senior citizens and the contributions they have made to our society and our lives. In 1988, President Ronald Reagan signed a proclamation making this an official holiday. It’s important to give our senior citizens an honored place in our lives, but I am afraid the opposite is often actually true. We should make an effort to hear the stories and glean wisdom from those who have walked the path of life longer than we have. Not just today, but often let’s seek out the elderly. Enjoy the company of grandparents and perhaps visit a nursing home. Ask about their lives and be prepared to listen, because we all enjoy sharing our stories. Post on social media using #SeniorCitizensDay.

Verse: They [The righteous] will still bear fruit in old age, they will stay fresh and green, proclaiming, “The Lord is upright; He is my Rock, and there is no wickedness in him.” Psalm 92:14 NIV

Prayer: Lord, this verse has always given me hope. Thank you that you still use us in our old age. We pray for our elderly. We ask that they will live close to you and that you will use them in a powerful way. We pray they will walk wisely and share the wisdom they have accumulated over the years with the younger generations. Give them a purpose, peace, and joy as they transition to their later years. Help the youth to treat them with respect. In Jesus’ name. Amen.

I can’t believe we have come to the place in the United States where this practice is going on, but it is and we have. When this news came out through undercover videos taken by the Center for Medical Progress, I didn’t want to believe it, but unfortunately, the proof is in the videos. Let’s join in praying that this horrific illegal practice be stopped.

Verse: Did not he who make me in the womb make them? Did not the same one form us both within our mothers? Job 31:15 NIV

Prayer: Lord, we are sickened by the harvesting and sale of these body parts from aborted babies. We confess this terrible sin and ask for your forgiveness. We ask that those involved would be convicted of their sin and confess it. We pray this practice — and that of abortion — would stop. May we be a nation that values the life of an unborn child and does everything possible to protect our children. In Jesus’ name. Amen.

3. Teachers Preparing for Back to School

I know it’s only the beginning of August, but in my state, several school districts are on a year-round schedule and started back to school the last week of July! Two of my sisters are school teachers and they are both already working on getting ready for the school year and setting up their rooms. Let’s support our teachers through prayer at the start of this new school year. Remember, teachers are now held accountable for things that often times they have no control over.

A Prayer for Teachers

Verse: It was he who gave some to be apostles, some to be prophets, some to be evangelists, and some to be pastors and teachers, to prepare God’s people for works of service, so that the body of Christ may be built up until we all reach unity in the faith and in the knowledge of the Son of God and become mature, attaining to the whole measure of the fullness of Christ. Ephesians 4:11-13 NIV

Prayer: Lord, we thank you for our teachers. They are on the front lines of our next generation serving and performing in an often thankless job. We pray for wisdom and strength. We pray for a strong moral character built on the foundation of God. We ask for the support and the resources they need. May their students listen to and respect them. May they teach in such a way that their students can grasp the facts and learn their lessons. Please protect them, we pray. In Jesus’ name. Amen.

At the end of July, Nigerian forces rescued 101 children, 67 women, and 10 men, all of whom had been kidnapped over the last year by this terrorist group. None of the 219 Chibok school girls were among those rescued. This is a cause for praise and prayer; praise for those rescued and prayer because many, including those 219 school girls, are still missing.

Verse: The Israelites groaned in their slavery and cried out, and their cry for help because of their slavery went up to God.” Exodus 2:23 NIV

For over 10 years, California and other western states have been contending with a drought. Half of the state is categorized as being in an “exceptional drought.” The drought is a springboard for other problems, like wild fires and farming difficulties. Governor Jerry Brown has called for 25 percent reductions in water usage by towns and cities. Let’s pray that God will send rain so that California can refill its reservoirs and have an adequate supply to support its citizens and industry. Let’s also not miss the chance to pray for droughts of other types in peoples lives, particularly that of God’s word and his presence.

How Bad Is the Drought in California?

Verse: Then I will send rain on your land in its season, both autumn and spring rains, so that you may gather in your grain, new wine and oil. Deuteronomy 11:14 NIV

Prayer: Dear Jesus, in the Bible times, you would send a drought upon Israel as a sign that they needed to turn from their sin back to you. Lord, we pray that this drought would also remind us to seek you to fulfill our spiritual thirst. We pray that we will turn from the sin of ignoring you and get our lives back on track by serving you. We pray also for periodic, steady rains to fall upon California and the others states experiencing drought. Amen.

Thank you for praying with Only By Prayer through the month of August. Feel free to add other requests in the comment section below.

Re-Advent Your Life Are the hectic holidays derailing your devo time with God? If so, we’d love to have you join us in our new digital Advent study called Re-Advent Your Life. We know you’re busy, so we’ve designed it to take only 15 minutes a day. This downloadable (immediate access) PDF works on any END_OF_DOCUMENT_TOKEN_TO_BE_REPLACED

Today is Ash Wednesday, the beginning of Lent. As a child, I remember the solemn mass of Ash Wednesday and being anointed with ashes in END_OF_DOCUMENT_TOKEN_TO_BE_REPLACED

I love Christmas. I love the displays, the music, the food and the lights, but this was overwhelming. Despite the fact that it was night, END_OF_DOCUMENT_TOKEN_TO_BE_REPLACED