You are here: Home / Blog / Tired of Failing at Goals? 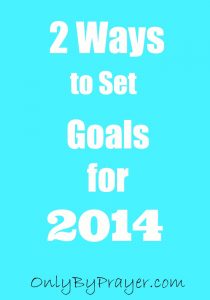 Lately, I’ve been spending some time setting goals and praying about the year ahead. I love the fresh start that the New Year affords us but have to admit that I’ve never been very good at setting  — or keeping  —  goals. Identifying priorities is not one of my strengths. I feel almost paralyzed at the prospect of it all. What if I set the wrong goal and I’m boxed in for the whole year and I can never change it?! (Silly, I know.) So goes the thought process in my head.

If at First You Don’t Succeed …

Well, this year a few things are different. First, I joined the Compel writers and speakers group from Proverbs 31 Ministries. Using one of their tutorials, I actually set six smart goals that I feel rather hopeful about. Whether I follow through with them remains to be seen, but they are realistic, specific goals. For example, rather than “Write a book this year,” one of my goals says “I will write a Kindle book on Prayer Strategies as one of my four special projects for this year, and I will work on it on Friday afternoons.” See what I mean by specific? Through this training, I realized that being specific will actually give me a chance of succeeding and hitting at least some of my goals.

The second thing that happened is that I stumbled across a totally different way of approaching goal setting. One morning this week I had the Today show on in the background as I was eating breakfast. My ears perked up when I heard Al Roker and Natalie Morales mention goals, so I tuned in to hear what they had to say. They introduced their guest, motivational speaker Jon Gordon. Jon didn’t sound too hopeful about the whole process of goal setting as he cited the following statistics:

I could just see my smart goals going up in a puff of smoke.

Instead, Jon recommended a simple goal-setting process he calls One Word: God gives him one word for the year that becomes his focus.

Hmm. That sounds easy enough, yet powerful. He said in the last three years that he, his family, and now many others (including sports teams, businesses, and schools just to name a few) have done this, it has revolutionized their lives. Here’s the simple three-step process he says will help you choose your word.

Look in. Look up. Look out.

I decided to check out the One Word website to download a free action plan to take me through the three steps of choosing my One Word for the year. Incidentally, I bought the book One Word That Will Change Your Life that Jon wrote with Dan Britton and Jimmy Page, which I really like. It’s an inspiring read and only takes about 50 minutes to get through.

And the Word Is …

So, back to me. God gave me my word for the year: Listen. Already it’s changing how I go about my day. I’ll share more about that after I’ve lived with it for a while.

Does this mean I’m going to drop my smart goals? Nope. I’m still excited about trying those out, too, and will update you on that progress in about a month.

What about you? Where are you in setting goals for 2014? Are you a believer, or do you think it’s a waste of time? Will you choose One Word? If so, I’d love to hear it. Please share in the comment section below. If you’d like to watch the Today show segment with Jon, I’ve embedded it below.

Happy goal setting (or not) and pray on!

Visit NBCNews.com for breaking news, world news, and news about the economy

Today is Ash Wednesday, the beginning of Lent. As a child, I remember the solemn mass of Ash Wednesday and being anointed with ashes in the sign of the cross on my forehead. As an adult, I attend a Protestant church, but I’ve always loved the traditional church calendar recognized by the Catholic Church. There END_OF_DOCUMENT_TOKEN_TO_BE_REPLACED

I love Christmas. I love the displays, the music, the food and the lights, but this was overwhelming. Despite the fact that it was night, END_OF_DOCUMENT_TOKEN_TO_BE_REPLACED

How can you go about “re-adventing” Advent and Christmas in the midst of the unfamiliar, the challenges of 2020? What does this look like for END_OF_DOCUMENT_TOKEN_TO_BE_REPLACED