You are here: Home / Consider the Lilies / He Calms the Storms

Those who go down to the sea in ships, who do business on great waters,

They see the works of the LORD, and His wonders in the deep.

For he commands and raises the stormy wind, which lifts up the waves of the sea.

They mount up to the heavens, they go down again to the depths;

Their soul melts because of trouble.

They reel to and fro, and stagger like a drunken man, and are at their wits’ end.

Then they cry out to the LORD in their trouble, and He brings them out of their distresses.

He calms the storm, so that its waves are still.

Then they are glad because they are quiet;

So he guides them to their desired haven.

Oh that men would praise the LORD for his goodness, and for his wonderful works to the children of men!

Let them exalt him also in the congregation of the people, and praise him in the company of the elders. 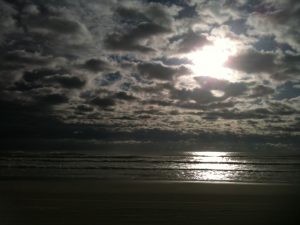 I took this picture while watching storm clouds disperse from the early morning sky in St. Augustine. I love the picture the psalmist paints of God calming the storm so that its waves are still and then guiding His people to a desired haven.

What storms do you have in your life today? Ask God to provide a safe haven for you to rest in.

Today is Ash Wednesday, the beginning of Lent. As a child, I remember the solemn mass of Ash Wednesday and being anointed with ashes in the sign of the cross on my forehead. As an adult, I attend a Protestant church, but I’ve always loved the traditional church calendar recognized by the Catholic Church. There END_OF_DOCUMENT_TOKEN_TO_BE_REPLACED

I love Christmas. I love the displays, the music, the food and the lights, but this was overwhelming. Despite the fact that it was night, END_OF_DOCUMENT_TOKEN_TO_BE_REPLACED

How can you go about “re-adventing” Advent and Christmas in the midst of the unfamiliar, the challenges of 2020? What does this look like for END_OF_DOCUMENT_TOKEN_TO_BE_REPLACED