How To Measure Up to God’s Standard, Part 2

“Therefore, this is what the Sovereign LORD says: ‘Look! I am placing a foundation stone in Jerusalem, a firm and tested stone. It is a precious cornerstone that is safe to build on. Whoever believes need never be shaken. I will test you with the measuring line of justice and the plumb line of righteousness.” (Isaiah 28:16-17a NLT)

In Part 1 of this post, we left Israel in limbo waiting through 400 years of silence from God. I can’t imagine living my whole life without any sign or word from God. Finally, God breaks His silence, and He does it through a series of spectacular angelic visitations.

Exit Law Enter the Grace of the Cross

To our eternal benefit, God sends a heavenly baby to earth and in that action He does away with the law as a means of forgiving sin. No one had been able to keep the law until, that is, Jesus came to earth and lived a sinless life. Jesus did what no one before Him was able to do and no one after Him will ever be able to do. God put the penalty of the world’s sin on Jesus. His death on the cross included payment for my sin and your sin. God then forever broke the power of sin and death with Jesus’s spectacular Resurrection three days after His death.

We now have a new plumb line: the cross. 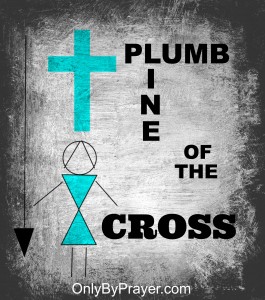 When we confess our sins and accept Jesus’ payment for them on the cross, we are forever in true with God because of the plumb line of the cross! And each day, we can align ourselves with Jesus and the Holy Spirit to make sure we are continually transformed into the image of Christ (2 Corinthians 3:18).

God has always provided a plumb line for us. For the rest of history, that plumb line is Jesus and the cross.

No matter how crooked your life may look right now, the plumb line of the cross can straighten you out with God. You can start your journey with God by praying this simple prayer:

I admit that I am a sinner. I ask that you forgive me for my sins. I realize on my own I can do nothing to make up for them. I accept Jesus’ death on the cross as payment for my sins, and I ask Him to take charge of my life. Amen.

If you just prayed that prayer and you are able to do so, please leave us a message below in the comments. God bless you.

How To Measure Up to God’s Standard, part 1 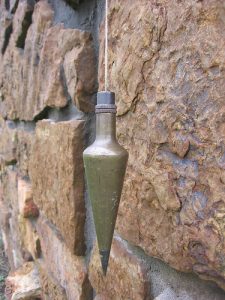 I answered, “A plumb line.”

And the Lord replied, “I will test my people with this plumb line. I will no longer ignore all their sins. The pagan shrines of your ancestors[a] will be ruined, and the temples of Israel will be destroyed; I will bring the dynasty of King Jeroboam to a sudden end.”                    Amos 7:7-9

(Just in case you’ve never used a plumb line, let me explain how it works. Basically a plumb line is a long string with a weight at the end. When you want to establish what is perfectly true or vertical, you suspend the string from the top of a structure and then let it unfurl itself so that the weight dangles straight down without touching the wall or object you’re trying to align.  When it stops moving the vertical line or true has been established. I used one years ago when I was wallpapering my kitchen.)

I am so taken with these scriptures today. I can just picture God

a plumb line from his hand and then turning his gaze upon His children Israel to see how they line up. Now that makes me nervous. Why? Because I know I could very well be next on the test list!

Well, we can clearly see that God who created our world and everything in it is a stickler for perfection. We need only consider the beauty of creation in Genesis 1 to see that. Unfortunately, the perfect world God created didn’t last too long. Sin marred the garden and all of creation including people, and we haven’t been the same since. It bothered God that His world and His people were out of true.

At the stage of history that Amos finds himself in, the Israelites were a crooked mess. They had set up pagan shrines and were worshiping false gods, among many other things. We may wonder if they were helpless to do anything about it. After all, the perfect world God made was gone.

The simple answer is “No.”

God had given the Israelites a plumb line to align themselves with, and that plumb line was the law — the rules, regulations, commandments, worship, and sacrifices that God had taught them. This was the way for them to atone for their sins so that they could continue to stay in relationship with Him.  We can see that throughout the Old Testament, the Israelites spent a good amount of time in and out of true and suffering the consequences for it: wandering in the desert for 40 years, enduring the rule of evil kings, and being defeated and taken as captives to Babylon.

Throughout these many years, God sent prophets calling the Israelites to return to the Lord, to get back in true. When they obeyed the law, God would bless them. When they ignored the call to repentance, He would allow bad things like enemy attacks to draw them back to Him, to straighten them out. Sometimes they did. Many times they didn’t. Can’t you just see Israel swinging back and forth like a pendulum on a clock? Something had to give.

Finally, God is silent for 400 years. I can’t imagine going 400 years without hearing from God, but that’s what happened. The Israelites had to wait that long for the next plumb line to appear.

We’ll talk about that in How To Measure Up to God’s Standard, Part 2.

In the meantime, share your thoughts in the comments below about why the plumb line of the law didn’t work so well for the Israelites.