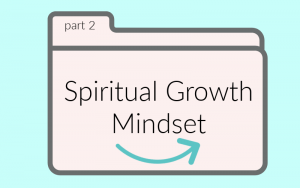 I’ve been talking and thinking about a spiritual growth mindset.

It’s everywhere. What we think and how we think matters. God tells us in His word we are not to be con-formed to this world, but trans-formed by the renewing of our minds. We need to leave behind the fixed mindset which is motivated by fear and doubt and live on the wild-side of faith aka Spiritual Growth Mindset.

A spiritual growth mindset is water-walking, giant-stalking, mountain-moving abundant kind of life. I want that. It’s the kind of mindset that pleases God.

The lunch boy had it.

5 Then Jesus lifted up His eyes, and seeing a great multitude coming toward Him, He said to Philip, “Where shall we buy bread, that these may eat?” 6 But this He said to test him, for He Himself knew what He would do.

7 Philip answered Him, “Two hundred denarii worth of bread is not sufficient for them, that every one of them may have a little.”

8 One of His disciples, Andrew, Simon Peter’s brother, said to Him, 9 “There is a lad here who has five barley loaves and two small fish, but what are they among so many?”

10 Then Jesus said, “Make the people sit down.” Now there was much grass in the place. So the men sat down, in number about five thousand. 11 And Jesus took the loaves, and when He had given thanks He distributed them to the disciples, and the disciplesa] to those sitting down; and likewise of the fish, as much as they wanted.

12 So when they were filled, He said to His disciples, “Gather up the fragments that remain, so that nothing is lost.” 13 Therefore they gathered them up, and filled twelve baskets with the fragments of the five barley loaves which were left over by those who had eaten.” John 6:5-13

He wandered out into the wilderness with several thousand other people to hear some preaching. There, he overheard Jesus talking to His disciples about feeding the people. The disciples were stuck in a fixed-mindset mode, so they gave nothing, not even offering the little they had.  But the lunch boy had a faith that was as big as God. Therefore, he took a risk and gave it all.

What do you have that you can give to Jesus? A little money? A little learning? A little house? A little talent? Take a chance, step out in faith and exercise a spiritual growth mindset and watch what God can do.

What do you think about a spiritual growth mindset?

Leave me a comment below, I’d love to hear from you!

To read other posts in this series, please click on the links below!